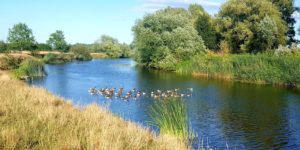 This all-day event was held on 22 March 2022, World Water Day, at Imperial College London and online. The event was built around the communities ELF works with and driven by the water pollution problems that they are experiencing. It identified key environmental issues affecting UK communities that are in close contact with rivers and waterways and scoped the barriers and opportunities to their resolution from the communities’ perspective.

We started the day with an opening address from Philip Dunne MP, who chairs the Parliament Environmental Audit Committee, followed by John Bates of Old Square Chambers who set the scene by giving us an overview of water law, regulation, what protections there are and how harm is mitigated.

Part two focused on the current problems and we began with Professor Nick Voulvoulis, Professor of environmental technology at Imperial College London, who shared the results of his water pollution research and explained how storm overflows and combined sewer overflows are monitored to assess how often untreated water is discharged into the UK’s waterways. It was sobering to hear that due to aging and underfunded infrastructure (such as water and sewage treatment plants, storm interceptor tunnels, pumping stations provided by privatised water companies), most overflows discharge untreated water containing raw sewage, E.coli and pollutants excessively and beyond the recommended discharge events.

The Whitburn Steel Pumping Station, near Sunderland discharged 760,000 tonnes of untreated sewage within 8 months in 2019. This number increased to 821,000 tonnes in 2021. Bob Latimer explained how combined sewer overflows are causing a serious pollution problem on the beach and in the sea around Whitburn and shared his experience of 20 plus years battling the Environment Agency at the European Commission and Court of Justice of the European Union to stop raw sewage from being discharged into on to Whitburn beach. He left us with a harrowing comment – it pays to pollute.

Attendees, both online and in-person, heard from Helen Hamilton of Marches Planning on nutrient management plans in rivers such as the River Wye, where campaigners are working to prevent agricultural nutrient pollution from entering the river and the special area of conservation. Helen explained how these plans work to manage nutrients entering Natura 2000 waterbodies and courses and how the future of nutrient management plans relies on better regulations, enforcement and monitoring from Local Planning Authorities. This was followed by Theo Thomas of London Waterkeeper who explained the immense effort needed to confront the diffuse water pollution in the Thames and Claire Hunt, an option convenor for integrated water management at the centre of environmental policy at Imperial College London, who informed attendees that 1 in 10 households have domestic misconnections links into their water and sewage lines. She provided helpful information for homeowners to check their connections.

The afternoon focused more positively on the potential solutions to empower communities to take action against water pollution. Justin Neal from Fish Legal explained to attendees the importance of data gathering through the Environmental Information Regulations requests to public bodies. We heard from Mike Owens from Hayling Sewage Watch about citizen science in the community such as regular testing projects to determine water quality. Mike co-founded the Clean Harbours Partnership, which began testing the water quality of 20 locations for five consecutive dates looking for 200 chemicals known to be present in sewage effluent. We heard from Stephen Eades and David Levy from Marinet who have worked tirelessly on marine issues and worked on the design and delivery of the Marine and Coastal Access Act 2009. Stephen and David explained how the Environment Act 2021 addresses water pollution but also highlighted the lacunas in the Act relating to surface water, lack of definitions and lack of secondary legislation.

We heard from Sally Ashby at the Sussex Kelp Restoration Project as part of the Sussex Wildlife Trust, who are working to restore 300km of marine ecosystems following the implementation of the Sussex Nearshore trawling bylaw in 2021. Claire Robertson at the Oxford Rivers Project, which works with concerned citizens to take action to improve Oxford’s rivers, provided uplifting news relating to one of the largest citizen science studies by weekly testing of bacteria in UK rivers and an application for bathing water status for the River Thames in Oxford.  Simon Tilley of the Hockerton Housing Project, explained about designing, implementing and monitoring the autonomous heating, renewable energy and water systems in place at the community of sustainable homes. The earth-sheltered sustainable homes are built to eliminate the need for a heating system and generate their own clean energy. Nick Woolley of Woolley gave us an insight into sustainable, autonomous homes and how it can be achieved en masse. Finally, we heard from Paul Powlesland of Lawyers for Nature, who explained the need for rights for rivers which is essentially formal legal status for rivers in the UK to protect them for all those that depend on them. Paul passionately explained that the relationship between the law and the natural environment fails to acknowledge rivers and waterways as living beings or legal persons with rights to the water that flows within their banks.

We thoroughly enjoyed preparing and attending the event. These are important issues that should be at the forefront of our minds in this time of climate and ecological crisis. A special thanks to Dr Jem Woods and his fantastic team of PhD students at Imperial College London (Caitlin Hinson, Theo Giakoumis and Hermann Jun Wei Kam).

The programme of the day is available here and a recording of the event will be available soon.

Thank you to our speakers:

Thank you to our Chairs:

giving up their time

of free help each year