Local people are still trying to get to the bottom of the Council’s intentions so far as the park is concerned. Having satisfied their legal duties to notify local people of their intention to sell public open space, the Council will not reveal to local people what is behind this process. The developer says it has been in discussions with the Council for four years, the Council say two. Obfuscation and lack of transparency create tensions and suspicion between the Council and their local residents which the Council does nothing to elevate.

“To have the ELF to assist us is a godsend. Who else would help us? There is no one else for us to turn to. To then have solicitors to help us too, well that was just superb. Now we stand a chance…Can’t thank you all enough….”
Resident’s comment

The report below is from our October 2014 newsletter.

Salford Council accused of concealing deal to sell off part of a Green Flag Local Nature Reserve
According to Salford Council’s own website, Blackleach Country Park is a “green haven right on your doorstep…designated as a Local Nature Reserve in 2004 and holder of the prestigious Green Flag award”. Given this, local residents who contacted us said the’d been more than a little surprised to see a small statutory Notice of Intent in a local freesheet, stating that part of the park was to be sold off for housing.

Worse – especially given the standard period of just two weeks to object – it then emerged that the council had been in discussions with developers for over two years and that a Heads of Terms agreement to sell, signed some nine months earlier, had been deliberately kept out
of the public eye. Further, a six month exclusivity agreement had been entered into with the developers, specifically to allow them time to work up their proposals.

Iain Lindley, a councillor from a neighbouring ward who attended a residents’ protest, said:

“They’re making it very difficult for residents to find out as most of the documents are in Part 2 which is secret. We [the councillors] had an entire call-in on the decision for St George’s playing fields and I had to sign a confidentiality agreement just to see the documents in the first place.” 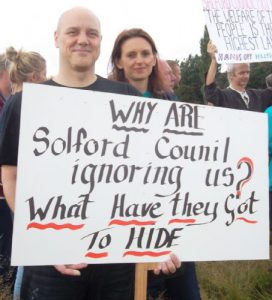 David Anderton of Ansons LLP agreed to assist the residents whose appreciation has been almost overwhelming.
Some content and all photos courtesy of Salford Star.