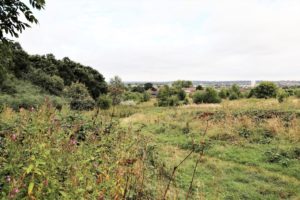 In January and March 2022, ELF instructed Joe Thomas of Landmark chambers in a Public Inquiry to decide the fate of a Town Green registered under the Commons Act 2006, and Local Wildlife Site, in the Green Belt. Registered as a Town and Village Green (TVG) in 2008 after a lengthy inquiry, Woodcock Hill VG in Borehamwood has been under the careful stewardship of local people and in particular the Woodcock Hill Village Green Committee (WHVGC) for many years. In 2020 the Borehamwood community received notice from Taylor Wimpey (TW), the owner of the Woodcock Hill Village Green, that they intended to seek de-registration of part of the TVG status which they duly did. A community in uproar, ELF was approached for assistance (see an earlier piece here). Working with Nick Grant initially and latterly Joe Thomas both of Landmark chambers and the wonderful characters of the WHVGC, it was an amazing experience for ELF to play a role in a public inquiry.

The VG has been managed by many active members of the community of Borehamwood, with the purpose of wildlife and habitat conservation and is a natural place, of unimproved grassland, unusual in that urban environment so close to people’s homes. It has provided the setting for many community events and activities during a long history of use. It is a typical village green and lies at the heart of the Borehamwood community. The community have loved, treasured and maintained this wild Local Wildlife Site and Village Green for years enhancing the conservation and biodiversity value, digging ponds, as well as holding cultural events, schools nature studies, and scouts.

Sadly, TW withdrawing their permission for the community to maintain the land for conservation in 2018, including no longer allowing them to access the site for the annual mowing, and the removal of the cuttings, needed to maintain the special grassland site for which it was designated a LWS, has led to encroachment and succession onto the grassland.

Village Green law is an idiosyncratic area of the law and a de-registration application unusual. In the long term TW want to build houses on this site. Under section 16 of the Commons Act 2006, in order to de-register the site TW had to propose replacement land instead of Woodcock Hill VG and demonstrate that the replacement land is at least as good, if not better than the land to be lost. The public interest test of both sites was under scrutiny. The purpose of the Inquiry was for TW to prove that the replacement land met the public interest test and was at least of equal value.

The community also argued that conservation activity was a “lawful pastime” as required under legislation along with the walking, bird watching and wild play activities that take place on the Green.

It became evident from TW that despite the designation as a LWS for its grassland, the incentive for the owner to degrade the site was recognised and even admitted at the Inquiry. Indeed TW stated that they would oversee the decline of the nature value of the LWS as they would allow no nature conservation and so the site would lose its nature value thus diminishing the public interest of the site. The objective for a developer landowner to develop land is of course better made if the site has less nature value.

Something that did come out of the inquiry which has to be viewed as a positive and certainly was by the Inspector, if not the community, was Taylor Wimpey’s commitment half way through the inquiry, on top of the £100,000 already proposed, to pay a further £370,000 towards ecological improvements to the replacement land.

On the 24th May it was hugely disappointing to learn of the Inspector’s decision to allow the de-registration of part of the Woodcock Hill Village Green which will pave the way for a planning application for hundreds of homes.

To say the heart will be ripped out of the community by this decision is no exaggeration. Woodcock Hill has been maintained and looked after by a community voluntarily, hundreds of thousands of hours of their time over the decades into their stewardship, because they love Woodcock Hill. By this decision the Inspector has removed that love. The community made clear that they have no relationship with the replacement land, have no history with it or investment into it and they will not have the same motivation with the new site to love and look after it. The Inspector didn’t even touch on this loss of community goodwill. WHVGC argued that the community feeling for the site should not be overlooked and indeed the very nature of the registration of a VG should not then be reduced to an administrative process to de-register whenever a landowner wanted a VG site. ELF believes the decision  sets a dangerous precedent and will be noted by developers.

ELF would like to thank Joe Thomas of Landmark chambers for steering us all so expertly though the inquiry. We heard from our local experts from amongst the community including Pat Strack, extraordinary local woman, who has chaired the WHVGC for years and always been at the heart of her community, Clive Butchins, likewise a stalwart of the community. Pat gave evidence on the heritage and landscape values of the site and how it has been used for generations by local groups and scouts, for religious and civil gatherings alike. Matt Dodds conservation lead at Herts and Middlesex Wildlife Trust, gave important evidence on behalf of the community regarding the lack of a biodiversity net gain assessment from the applicant and why it was important to understand the respective nature values of the sites. The Inspector didn’t agree. Other local experts included Chris Berry of Borehamwood CPRE. ELF would like to thank all who gave up so much of their time to this important matter.

Woodcock Hill is a typical ELF, David and Goliath case. Despite the Inspector’s decision we maintain the replacement land is in no way comparable to what will be lost to the community. Sadly the Inspector didn’t agree. WHVGC are now considering their options.