Sussex Wildlife Trust and ELF – Standing up for Nature 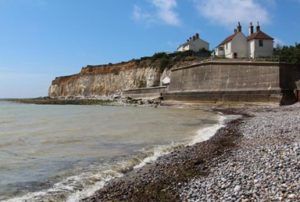 It is not so often that we see our UK conservation charities bringing judicial review challenges to poor environmental decisions. Put off by the vagaries and risks of litigation and committed to on the ground conservation delivery, public law challenges are a major and expensive distraction. However this summer, Sussex Wildlife Trust (SWT) working with ELF took the decision to challenge a decision by the South Downs National Park Authority which would have seen the destruction of a rare and protected chalk reef at the Cuckmere Haven.

Following a high profile media campaign, the owners of the Coastguard Cottages at the Cuckmere Heaven in Sussex were granted planning permission to extend and renew the sea defences that would have seen the life of the cottages extended for 85 years.  However the catastrophic environmental damage that was being proposed through the development to the protected marine habitat of the chalk reef (a Marine Conservation Zone and Site of Special Scientific Interest) was irreversible. As loss of protected habitats all over the world, the direct impacts on the unique species, including crabs, mussels, oysters and a beautiful and rare seahorse would be profound as hundreds of square metres of reef would have been lost under concrete.

SWT and Natural England had put in strong objections against the proposals but had been ignored. With assistance from ELF, SWT investigated the position and found that whilst the development had been screened as requiring an Environmental Impact Assessment (EIA), in fact an EIA had not been undertaken. What had purported to be an EIA wasn’t and the impacts of the development had not been properly assessed; assessment and mitigation to be dealt with by way of condition post decision.

Ned Westway of FTB was instructed initially pro-bono and a Pre-Action Protocol (PAP) letter was sent by ELF. At which point Leigh Day kindly stepped in to take the matter over. Following receipt of the PAP letter, South Downs National Park Authority (SDNPA) agreed that there had been a failure to undertake an EIA and therefore a failure in the decision making process and would agree to the decision being quashed. The interested parties, Cuckmere Haven SOS and the owners of the cottage also agreed. SWT and ELF were delighted at the outcome and SWT are now working with SDNPA in the hope that better proposals for the cottages might be forthcoming.

ELF works with lots of different environmental communities, local grassroots groups mainly but also with some of the larger nature organisations. We are proud of our associations with them and to be helping them where we can so that they can concentrate on delivering conservation and nature protection.