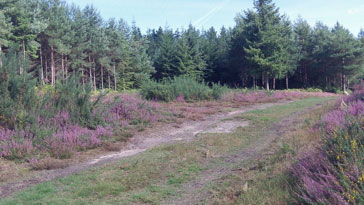 Heathland restoration carried out by the Dangstein Conservancy

Dangstein Conservancy, operating in the newly created South Downs National Park, is a “grass-roots” land-based action group with the broad aim of practising and promoting more environmentally sustainable ways of living on, and caring for, the land. For nine years vested local interests had deployed various stratagems to frustrate the Dangstein Conservancy, until November 2019 when, following a lengthy public inquiry, the Planning Inspector found in favour of the group, whose spokesman kindly said this was “thanks largely to the inspiring and generous intervention of the Environmental Law Foundation”.

The following is an abridged version of their subsequent report:

The SDNP is dominated by farming, forestry, market towns and scattered dwellings, with many cities and urban areas fringing its protected landscape. Within commuting distance of London and other cities, it has some of the highest residential property values in the UK. This and other factors mean that, despite its protected status, the National Park is not immune from social, environmental and economic problems that are both local and global in their cause and in their effect.

In 2016 the Conservancy put forward planning proposals that sought to deliver mutually supportive environmental, social, and economic “net gains” to the local community, prioritising ecological objectives and promoting community understanding and enjoyment of our woodland whilst making productive use of local timber that is a renewable and versatile natural resource. The Conservancy re-introduced a centuries-old practice of ‘productive multifunctional woodland management’, that is active management of woodland for its productive resources, for learning crafts skills, for personal wellbeing and for social interaction.

However, forestry is not currently defined in UK planning law and is merely an addendum to agriculture – growing trees as a crop. Conventional wisdom and to some degree official understanding still seek to argue that “forestry” entails periodic visits to the woods by peripatetic contractors perhaps every 40 to 80 years to undertake landscape-scale tree felling, followed by replanting and further lengthy period before the cycle restarts. This may be viable for the large Scandinavian pinewood commercial forests that benefit from economies of scale. But the consequent devastation of the landscape and its wildlife, and the slow recovery of forests managed this way is wholly inappropriate in a National Park in England, designated to protect the visual appeal of its wooded landscape and with the express purposes of ecological conservation and promoting public understanding and enjoyment of the Park’s “Special Qualities”.

The Conservancy’s 2016 planning proposal won support in principle from the Planning Committee, but after necessary technical clarifications it was re-submitted. Perversely, the committee changed its mind in 2017 and refused the proposals on principle.

The Conservancy appealed the planning decision in January 2018, which was ultimately heard in four day Public Inquiry in November 2019, the delay having been caused by the neighbours’ issue of a Judicial Review against the planning authority. The Conservancy’s crowdfunded case amounted to over 230 documents and was a substantive, convincing, coherent and concise argument, steered by the fortuitous and generous intervention of the ELF, a legal charity “promoting the collective, good decision-making [in matters affecting the natural environment] which is at the very heart of civilised, democratic and stable societies“.

The Planning Authority argued that the information provided in the Conservancy’s case had not “demonstrated that the proposals would avoid conflicts with development plan policies” on Sustainable Development, Landscape Character and Relative Tranquillity. This contention was very robustly countered by the Conservancy. The Inspector agreed, stating the “For the vast majority of the time there should be very little disturbance beyond the site at all. It does not seem to me therefore that there should be much if any harm to residential amenity” in the neighbourhood. The Inspector determined that “The amenity and experiential qualities of the landscape will be enhanced as many more people will be able to experience the woodland and to learn about it without unacceptably degrading its essential qualities“. The Inspector further stated that “In my view the activities proposed by the appellant fit into both purposes [of the National Park], wildlife and cultural heritage will be enhanced and opportunities for the understanding and enjoyment of its special qualities will be promoted” and adding that “I consider [local residents’] concerns are misplaced“.

The case firmly establishes that sustainable environmental proposals should be supported, especially in a National Park. The case shows that neighbours intent on furthering their own private objectives cannot credibly argue that protected status of the land excuses them from addressing the many environmental, social and economic problems we face as individuals, communities and a society. If anything, National Park status confers a deep responsibility to address such challenges even more urgently, as residents and landowners in National Parks are custodians of the land held in trust for the benefit of the entire nation.

We consider that access to the services of a barrister at the Planning Appeal stage, who can pull together an extremely complex argument, retain focus on key points and respond to counter-arguments of barristers acting for other parties is critical to the successful functioning of the planning process. For community groups without the necessary expertise and resources to present such a credible, intelligible argument and without being unduly overwhelmed by the emotional commitment to their cause, the good services that ELF facilitated significantly levelled the odds in an adversarial arena against in which the Conservancy had struggled for the previous 9 years.