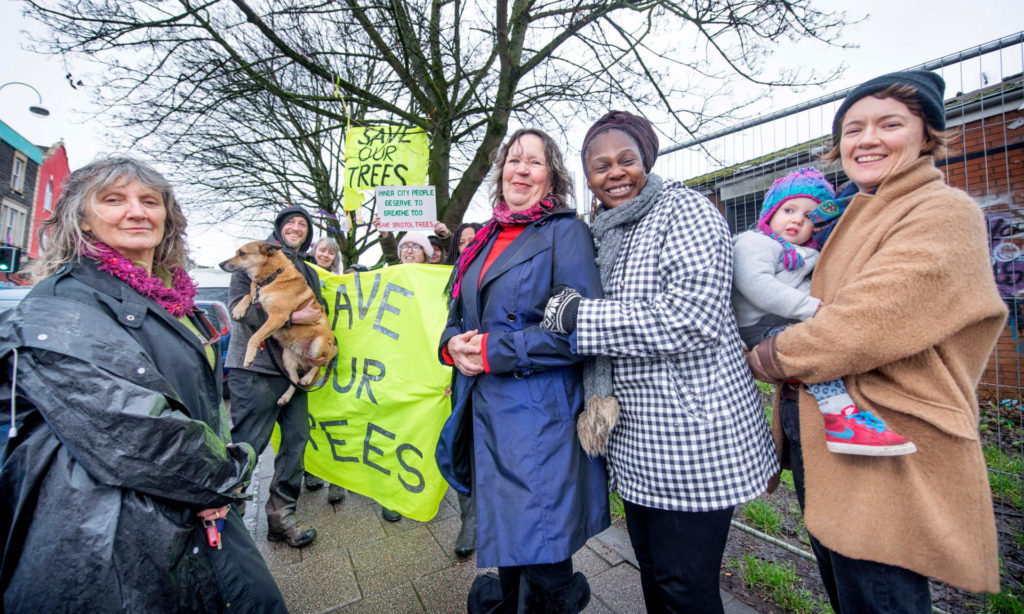 It is a truth widely acknowledged that trees have little protection. If a tree or woodland that you are fond of has the good fortune to have a Tree Protection Order (TPO), it still doesn’t stop it being felled, when it comes to development.

This was brought into stark relief last month when we were approached by local Bristol residents about a fight to save 3 mature Maple Trees, originally there had been 5. All 5 trees had TPOs but when a developer with previous outline planning permission to develop land, put in a notice to demolish the buildings on the land, it looked like the trees would be forfeit. Two trees were felled without residents realising what was happening which produced a great wave of local anger and protest to save the remaining 3. Local and active protest ensued and the residents were soon a common sight protesting around the trees. In a place of poor air quality and lack of green space, the trees are locally valued and loved. With great determination and at this stage, no legal assistance, residents scrutinized planning documents and realised there was a question over whose land the trees were on. And yet still there seemed there was nothing that would save the trees, bar protest. When ELF became involved, we sought on the ground advice from Polly Reynolds, ELF member solicitor at Temple Bright solicitors in Bristol. Polly quickly met with residents and a letter was fired off to the Planning Department setting out residents findings. This has had the effect of postponing the felling of the trees for the moment, whilst an investigation is carried out.

The other contributing factor to the residents’ success was a well devised media campaign. Whipping up a media storm for a local campaign can be an extremely useful form of attention seeking. These residents were interviewed by many news outlets, finally appearing on Radio 4’s 5pm News Programme. Creating a PR disaster for a local authority can be a powerful tool.

The Environment Bill, due for its second reading at the end of February before the committee stage, contains additional protections for trees.