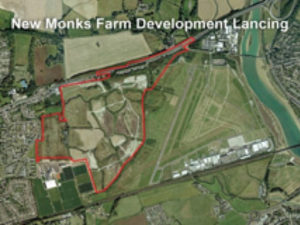 Last summer ELF was approached by a local environmental group in Shoreham, East Sussex campaigning against proposals for a large scale housing development, being enabled by an IKEA development, the scale of which is something unknown in the setting of the South Downs National Park. Over 30,000 square feet, the size of 4.25 football pitches, it is three times that proposed as a “minimum” of 10,000 square feet in the local plan adopted at around same time as the submission of the planning application. Local people having engaged actively in the local plan examination were incredulous that such a proposal was being supported by the local authority, given the time spent assessing the proposals through the local plan examination. With linked commercial permission for development at Shoreham Airport, concerns over airport safety have seen hundreds of call in requests. Planning permission was approved in October but we are still waiting for the decision.

Another of the features of this proposal is what will happen to a local and well established gypsy and travellers’ site, Withy Patch. The plan to relocate the community to a location which is basically an island, will be surrounded by 3 roads, the A27 with its new roundabout, the access road leading to the internal roundabout for Ikea and Cala housing and the new road to the Airport. The development will take 8 years to complete with all the ensuing noise, dust and vibrations. To move the community from a long established site, to the middle of a large construction site does not seem to be in the best interests of the families facing relocation. In the meantime the developer has offered to build a 2-metre high fence but given the significant dust of construction, we do wonder what protection a fence will provide. ELF is very grateful to Marc Willers QC, head of chambers at Garden Court, for his time as we attended together a meeting with some of those most affected by the planning proposals. It was sobering to listen to tales of everyday discrimination suffered by the families at Withy Patch. With no Equality Impact Assessment for the families at the community travellers’ site, and other concerns about the decision from the wider community, we are waiting for a decision on a call in before we know which way this matter will go.