ELF is going to just report on one story this month. It is an important story and demonstrates the level of threat posed by fragmentation of important habitats, as housing targets, road and airport expansion threaten to fragment the nature we have left in the UK. 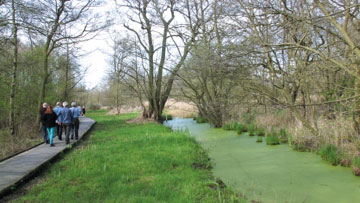 Sadly despite the refusal of the City Council, the developer has appealed the decision and a 12 day planning inquiry is due to take place, starting on the 12th November 2019. YWT have been granted Rule 6 status, which means the charity can take an active role in the PI and can call expert witnesses on why the development threatens the site. Rule 6 status can be a very important role for communities who may be able to bring expertise to the inquiry that the Council may not be including in their own case. Amongst the eminent witnesses being called by the YWT is Sir John Lawton, author of Making Space for Nature. He will be called as a witness on the fragmentation of habitats.

YWT came to ELF, seeking assistance. Unused to such legal entanglement, the charity has little money for such resource hungry demands. As Louise Wilkinson, Conservation Policy and Campaigns Manager who is leading the campaign said “As a charity whose primary work is on the ground deliver we are very thin on resource and money for this sort of thing!”

ELF was delighted when Emma Louise Fenelon and Darragh Coffey both 1 Crown Office Row agreed to assist. David Hart’s team have a rich history of assisting ELF with Public Inquiries with some notable successes, not least with their input into the M4 Newport relief road, recently refused permission by the Welsh First Minister. ELF is extremely grateful to Emma and Darragh.

As report after report sets out the UK’s terrible record on protecting nature, amongst the worst in the developed world, massive declines in numbers of species, some of most loved and iconic species in free fall, yet time and time again the few and tiny nature sites that we have left are threatened by development plans. The test is whether our planning and nature laws prove robust enough to protect them. The Chief Executive of YWT Rachael Bice of YWT said “Once again our laws to protect nature are being tested to the absolute limit – perhaps it is time for a comprehensive review of the laws in place and how they work together, given the challenges of the 21st century are much more extensive and urgent than could have been imagined when the laws we have were drafted.