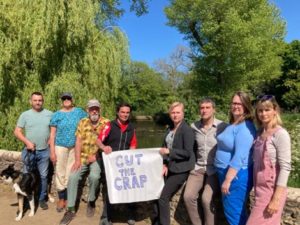 ELF has been assisting a Green Councillor in Lewes District, Emily O’Brien, in her local campaign to have Southern Water clean up their act. Through the ever generous advice of Alex Shattock at Landmark chambers who ELF works with regularly on water pollution matters, we have been supporting Emily to understand what leverage there is through the NPPF for new housing development, and whether there was scope for the Local Planning Authority to require the utility company to properly assess the sewage impacts of each new development. An exciting motion was put to Lewes District Council and passed on 23rd May 2022. This is now being looked at with much interest by other local authorities.

The Lewes District Council motion will mean that for the first time, local water company Southern Water will be asked to make clear the impact of new development on sewage discharge into local rivers and seas, when they respond to planning applications. Currently the planning system assumes that there will be enough capacity to take new development so this question is not asked.

Lewes District Council planning officers would also have to produce a specific section on the effect on watercourses when assessing planning applications for major developments.

Data from The Rivers Trust show that Southern Water discharged sewage into rivers and seas in the Lewes district over 800 times in 2020,

Green councillor for Ringmer & Ouse Valley, Emily O’Brien said “I am delighted to be taking this important step asking Southern Water to ‘come clean’ on the real impact of development. Releasing untreated sewage ending into our rivers and seas is simply not OK.”

“It’s common sense that every new house and every new toilet will add to the sewage burden on an already overloaded system. Even worse, thanks to loopholes in the planning system introduced by government, we are facing an onslaught of extra new housing development outside of that agreed via the local plan. Yet, at the moment the link between development and sewage overload is not made visible when it comes to planning. It’s time for that to change.”

Affected areas include Lewes Brooks which is a Site of Special Scientific Interest (SSSI) home to rare snails, flies, moths and water beetles. They particularly highlight the potential impact on the rare and much loved local, and protected, species of sea trout which is only found in this area.