When A Lagoon Is A Building

ELF were approached by CPRE (Campaign to Protect Rural England) Somerset and a local resident regarding the construction of large agricultural waste lagoons, big enough to hold hundreds of thousands of tonnes of waste. Through a loophole, these were being constructed under agricultural permitted development rights and therefore not subject to the usual planning controls including public consultation.

In particular, a company running an Anaerobic Digestion System (“ADS”) in Somerset, near the village of Spaxton had recently been awarded PAS110 accreditation for its digestate. This is an accreditation system referred to as “an approved standard” in the Quality Protocol produced by the Environment Agency and its effect is that waste is no longer considered waste and therefore not under the authority of the local waste regulator, the County Council. Instead, it was considered a planning matter to be dealt with by the planning authority (and not the Council).

The company contended that as the digestate had become a “product” with the same spreading regime as farmyard slurry, a lagoon for its storage could be notified as agricultural permitted development (APD) as it was argued that the lagoon was not a “building or a structure”. To the great consternation of local people, the local authority accepted the prior approval notice that the construction of the lagoon fell under the General Permitted Development, or more specifically, was not caught by “developments not permitted” provisions, essentially because the lagoon was not a building. 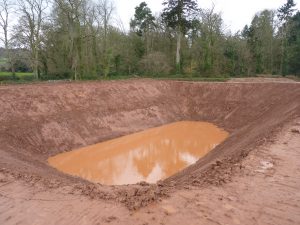 Clearly this question of whether or not a lagoon is or isn’t a “building” was the crux of the matter. This question was recently clarified for ELF by Claire McGregor barrister at 1 Crown Office Row – she concluded that lagoons are considered to be a “building or a structure” and therefore cannot be claimed to be Permitted Development under the APD provisions. Claire confirmed that there was a wide definition of “building” established in case law and that to conclude that the lagoon was Permitted Development, would not be consistent with the interpretation of the “purposive approach” taken by the courts.

This advice was sent to CPRE Somerset who were delighted with it as they now have positive advice to pass to the Council, that the company cannot build these huge lagoons in the landscape without planning permission.

CPRE Somerset have said that they will share this advice with other local CPRE branches.

These are the connections that ELF wants to propagate. ELF is also delighted that CPRE Somerset have joined ELF as a community member.

We draw strength from our membership and want to strengthen the advice that ELF can give.