We reported recently on a Tree Protection Order woodland, Local Nature Reserve and buffer zone for a Special Area of Conservation where at least annually a motor cross trial was held, causing serious damage to the woodland. There had been a year and a half of campaigning before ELF was contacted. 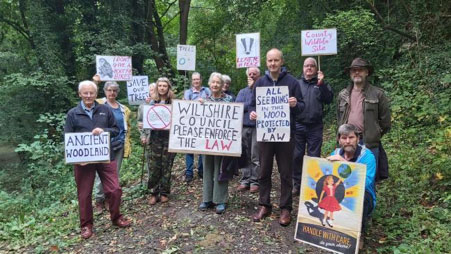 The trails were held under Permitted Development Rights (PDR) and therefore unless they were suspended through an Article 4 Direction, the Council claimed they could take no action to stop the trails. Though discussed the Council would not take action. We had advice from Ruchi Parekh at Cornerstone and found there to be leverage between the Habitats Regs and PDRs which we were to pursue. However, litigation was not required and we have since received the following  update.

“Just over a month ago we learnt that the woods had been put up for auction. Friends of Becky Addy Wood started a campaign to raise funds for the purchase of the wood. We then came to an agreement with Bradford on Avon Town Council for the Council to buy the woods with a donation of £30,000 from FROBAW. The Council approached the vendor, the wood was taken off the auction a day before the auction was due to take place, and the Council made the purchase. The transaction was completed at the end of last week. Bradford on Avon Town Council will be drawing up a management plan together with FROBAW to ensure that the wood is properly managed and maintained and that its conservation is enhanced. There are plans, for example, to seek designation of the wood by Natural England as a statutory nature reserve.

We wondered whether Wiltshire Council passed on to the club/the owner that legal action was in the offing and this may have had a direct effect on the owner’s decision to sell – and also the fact that the club did not try to buy the woods.

Thank you so much for all the support that you and Ruchi have given us in our long campaign to protect the woods. “