A case study by Kiran Mayer at ELF 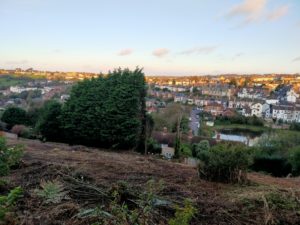 ELF recently assisted a local community in Hastings to successfully protect a local wildlife site from targeted development. We must celebrate success when it comes.

We have previously written about destruction to local wildlife sites (LWS) in relation to a City LWS in Cambridge. Since that time, we have seen record levels of enquiries from communities relating to planning applications on LWS. Due to their fragile status and lack of protection under the law LWS are coming under increasing threat from development. While Sites of Special Scientific Interest or Special Areas of Conservation/Special Protection Areas are afforded high protection under domestic and European law, LWS are locally designated sites of nature conservation which fall within a local council’s specified selection criteria. Their importance is recognised at a local level and they often make up wildlife corridors, forming key components of ecological networks and nature pathways linking up other nature sites. However, their importance is often underestimated.

Assisting concerned residents regarding a permission in principle planning application on a LWS in Hastings, this particular LWS has been threatened now with development for some years. The site which forms part of the Clive Vale LWS, was a high value, wooded stream valley with significant wildlife interest and forms an important greenspace with an abundance of flora and fauna. Sadly it has been regularly cleared by the landowner. Indeed was cleared last year, followed by an ecological survey and the planning application in principle submitted thereafter.

The planning authority’s local plan has specific policies in place to protect and enhance the local biodiversity and geological resources, including LWS and to ensure development proposals within LWS will only be permitted where the local need outweighs any harm to the nature conservation interest. The planning application on the LWS was a permission in principle, which is an application to remove the designation of a site (in this case a LWS designation) to allow it to be reallocated as a development site. The applicant proposed seven to nine homes to be built on the LWS and had undertaken coppicing approximately every decade, which actually enhanced the site’s biodiversity.

ELF wrote an objection letter to the local planning authority on behalf of residents. This raised serious issues such as the irreparable harm which development will cause to the LWS, the amenity of local residents using the wildlife site and loss of an important wildlife corridor. ELF also raised concerns regarding the inadequacy of the preliminary ecological appraisal, which failed adequately to assess the species onsite as surveys were undertaken outside of the optimum survey seasons. Taking advice from ELF adviser Dr John Feltwell, the appraisal failed to meet Chartered Institute of Ecology and Environmental Management’s standards of practice for planning applications and overall, failed to capture a complete assessment of the LWS.

Biodiversity net gain was another concern. The applicant’s ecology appraisal asserted that the loss of the LWS, including habitat value, biodiversity, and displacement of species, could be compensated through the biodiversity net gain metric. It was argued this would create a designated area purportedly of higher biodiversity than the LWS. ELF did not agree with this assessment. In reality the applicant did not provide the metric report or information on the designated area to show how the loss of the LWS would be compensated and made no attempt to address biodiversity net gain as expressed in the National Planning Policy Framework, Paragraph 174. ELF highlighted to the local council that it would be wholly unacceptable to determine the magnitude of loss should the LWS be developed without an accurate biodiversity net gain metric report. Our letter also highlighted to the planning authority that permission would directly contravene both local and national planning policies.

Thankfully, the local planning authority refused the application on 29th March 2022 quoting the reasons for refusal as “harm to the local environment by virtue of the loss of valued open green space with a Local Wildlife Site designation and consequent net loss of biodiversity”. With ELF’s support and the strength of local opposition against the application, we were able to save a valued LWS. However across the country, LWS continue to be targeted for development and there is a sharp rise in this type of planning application. Routinely we see applicants seeking to degrade the flora and fauna thus undermining the designation of the LWS. It is this type of disregard that will lead to significant loss of LWS and some of nature’s best wildlife corridors.