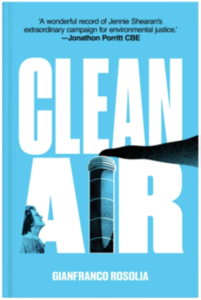 The inspirational true story of a woman’s rise from everyday housewife to remarkable environmentalist, is out now

CLEAN AIR narrates the story of people who lived on the doorstep of Monkton Coke Works from 1953 to 1990. Their daily reality was a horrendous nightmare of hazardous and acrid sulphur dioxide emissions, all-pervading soot, and clamorous tannoys. Over decades, the facility grew unflaggingly, converting ever-increasing quantities of coal into coke without concern for the residents’ well-being. In forming the Hebburn Residents’ Action Group, Jennie Shearan brought together the underrepresented residents of Monkton Lane Estate, and gave them a voice, igniting a national dialogue about the health risks from the pollution that her neighbourhood had to endure.

Written by Jennie Shearan’s grandson, Gianfranco Rosolia recounts the tale of his grandmother, working successfully with pro-bono barrister Charlie Pugh. Charlie went on to be an ELF professional member, understanding fully the importance of pro-bono work for communities ill equipped to protect their environment from bigger interests.

While the events in the book took place in the North East of England over thirty years ago, there is a timeless and universal resonance to the challenges that Jennie Shearan had to overcome during her extraordinary campaign for environmental justice. She battled a negligent big energy firm that prioritised profit over people, governmental bodies that lacked accountability, and institutional sexism. Jennie heroically took on all levels of the establishment, from British Coal to the UK government, galvanising her underrepresented town and bringing her case all the way to the European Parliament.

CLEAN AIR is available in paperback and ebook, and hardcover and audiobook. To purchase see here. All proceeds go to charity with a third being donated to ELF.